I've had a picture of a 1830 Crib quilt stuck on the door of a cupboard in my sewing room for years. I took the photo when I saw it in a book as it really appealed to me. 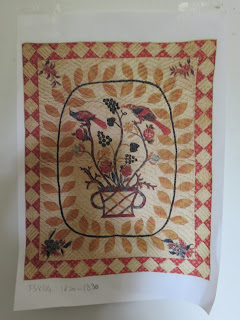 I was delighted when I saw that Susan Smith of Patchwork on Stoneleigh had drafted a pattern for the little quilt. This is what has been keeping me away from the computer, as I just had to make it there and then. I have thoroughly enjoyed making this quilt over the last few weeks. I had Susan's pattern reduced in size because I wanted it to be a little quilt. Here is mine, the background is a very pale cream, not white, as it looks here. 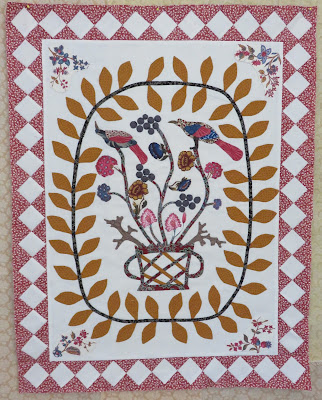 Another project I have started. I've been going through and throwing out old patterns, magazines and books no longer wanted and came across this pattern from a magazine that I had kept, as I had intended to make it for my Grand daughter. I'd ever bought the fabric for it. The project has grown somewhat as I now have three Grand daughters. You guessed it, I now have three to make. I have made one and I'm onto the second one. They are not too fiddly to make. The carry basket comes with a mattress, frilled pillow and a quilt. I think they  will like them as the girls are 4 and 3 years old. 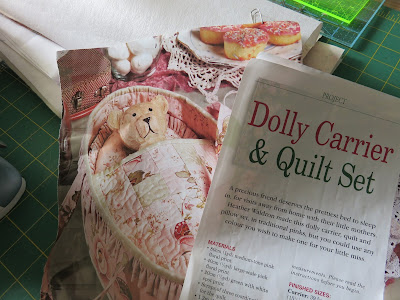 Autumn has arrived and the Camellia's are flowering. This one has so many flowers and looks like fried eggs. They don't last long but leave a carpet of white on the ground. 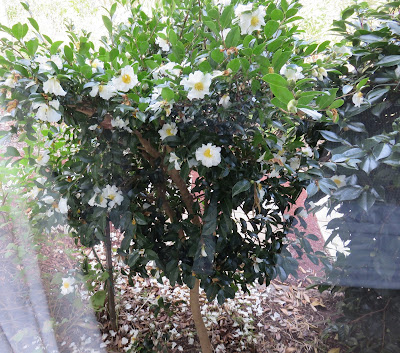 and the trees are changing. This is a Crepe Myrtle. 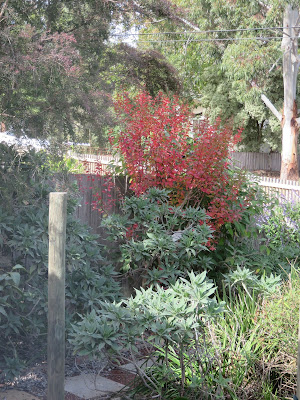 It's a beautiful little quilt Dorothy, wonderful when inspiration strikes and you can take advantage of it. I'm sure I have the same dolly basket pattern pulled out somewhere. It's very cute, but I hope I'm a long way off needing to make one!

Beautiful little quilt Dorothy, what a neat design. Just fell in love with it too.
Greetings,
Sylvia

I love when a project is so engaging it makes you drop everything else. Your quilt is lovely. I'm sure your little dolly carriers will be much loved.

Ohmygosh -- that little dolly carrier is adorable! As I have a little granddaughter on the way, I'm thinking I might need that pattern in a few years. Can you tell me what magazine it was in? Sometimes on-line searches turn these things up LOL. I love your version of the vintage quilt too -- very pretty!!!

That little quilt is so lovely! I can see why you just had to make it :) Grandchildren are such a precious gift. I know your little ladies will love their dolly carriers from Grandma.

That is a beautiful quilt. I do like saving antique quilt photos and someday I will redo them myself, fun to just try them.

Love your little reproduction quilt, so sweet. I made that dolly basket and was going to give it to a friends child, but my boys loved it as toddlers and played with it. I am now thinking I need to make another couple for a friend who has her first grand child. Such a nice time of year for flowers in the garden.

Love that little quilt - it has been on and off my "list" too over the years - yours is perfection! What size did it end up? What a delightful dolly carrier - great pattern and such lucky girls to have you make them one each!

How convenient to find a pattern for the quilt. It is lovely!!

The crib quilt is wonderful. It s unusual to see the early style for a small quilt. Love the doll carriers and I bet your fried egg camellias small lovely!

Love the new Susan Smith pattern. I just need to stay off of the computer... I keep buying patterns and more and more fabric for more and more quilts.

I have six new projects, and I'll probably never finish them all.

Have you made all of the quilts on the left side of your blog??? So jealous!