A Finish and a Start

I finished all that can be done at this moment on my Crib quilt. I want to put a border along the top, about 4"-6" deep but will wait until I know, is it a boy or a girl. 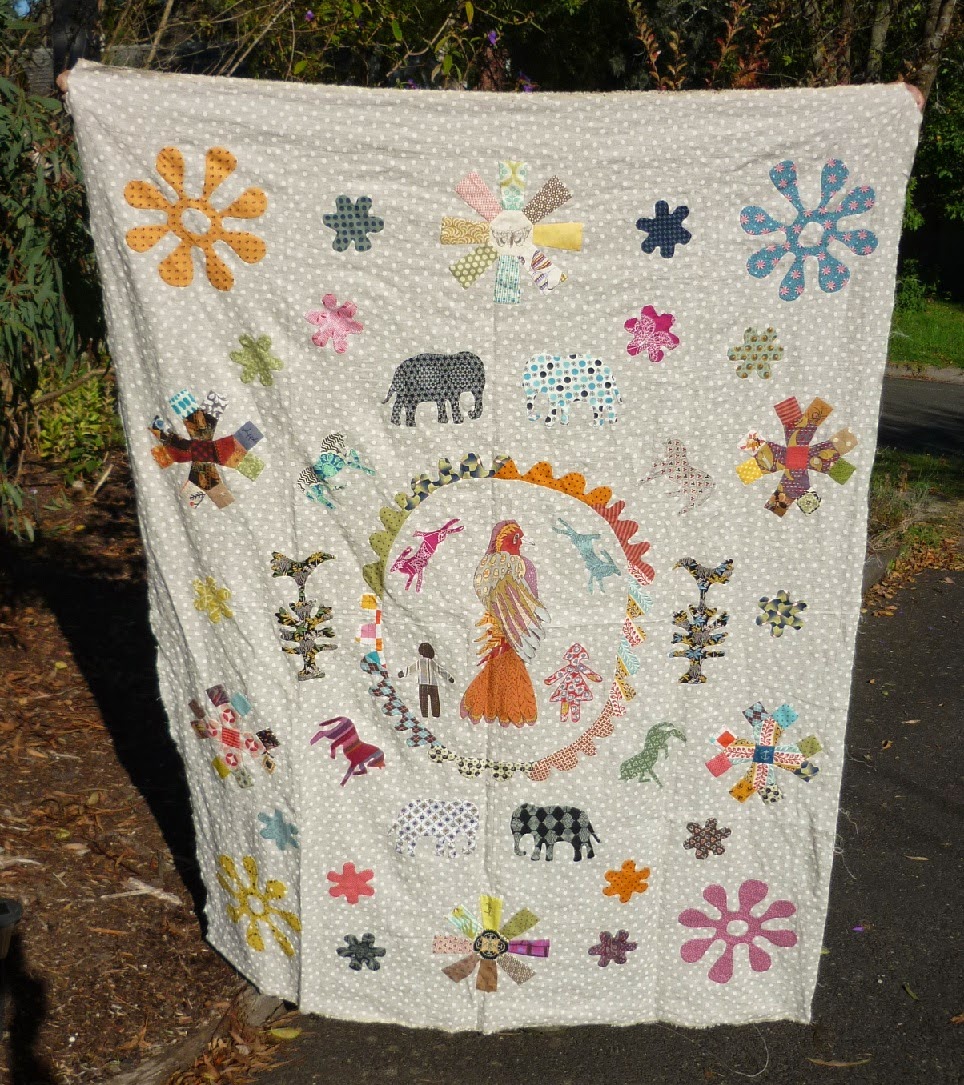 Time to make a start on a new pattern I bought at the Aust. quilt show recently. It is called Message in a Bottle by Irene Blanck. 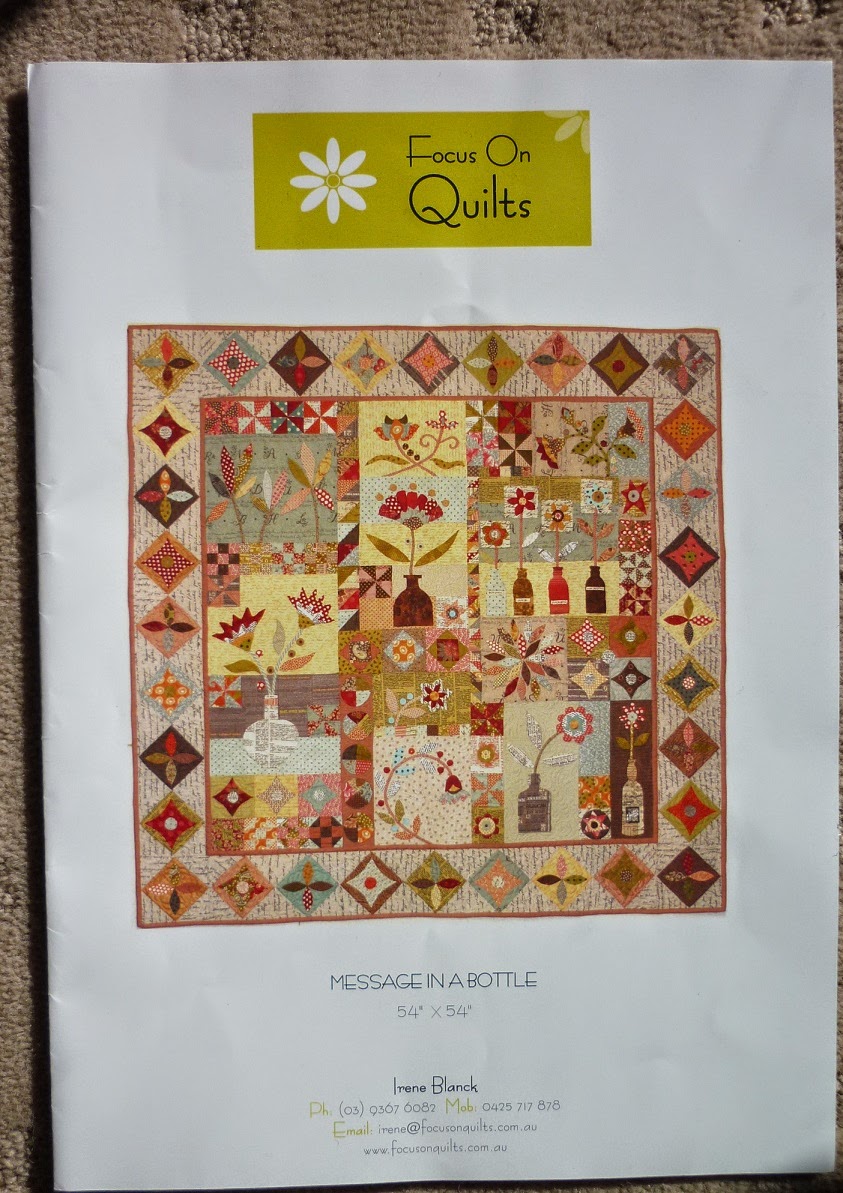 I will use my Japanese Taupes as I have a large bundle left over from making Yoko Saito's 'Houses" pattern and I've also been buying more as I saw them.  I'm waiting for a few more to arrive via the postman and there will also be quite a few 'linen' fabrics included. 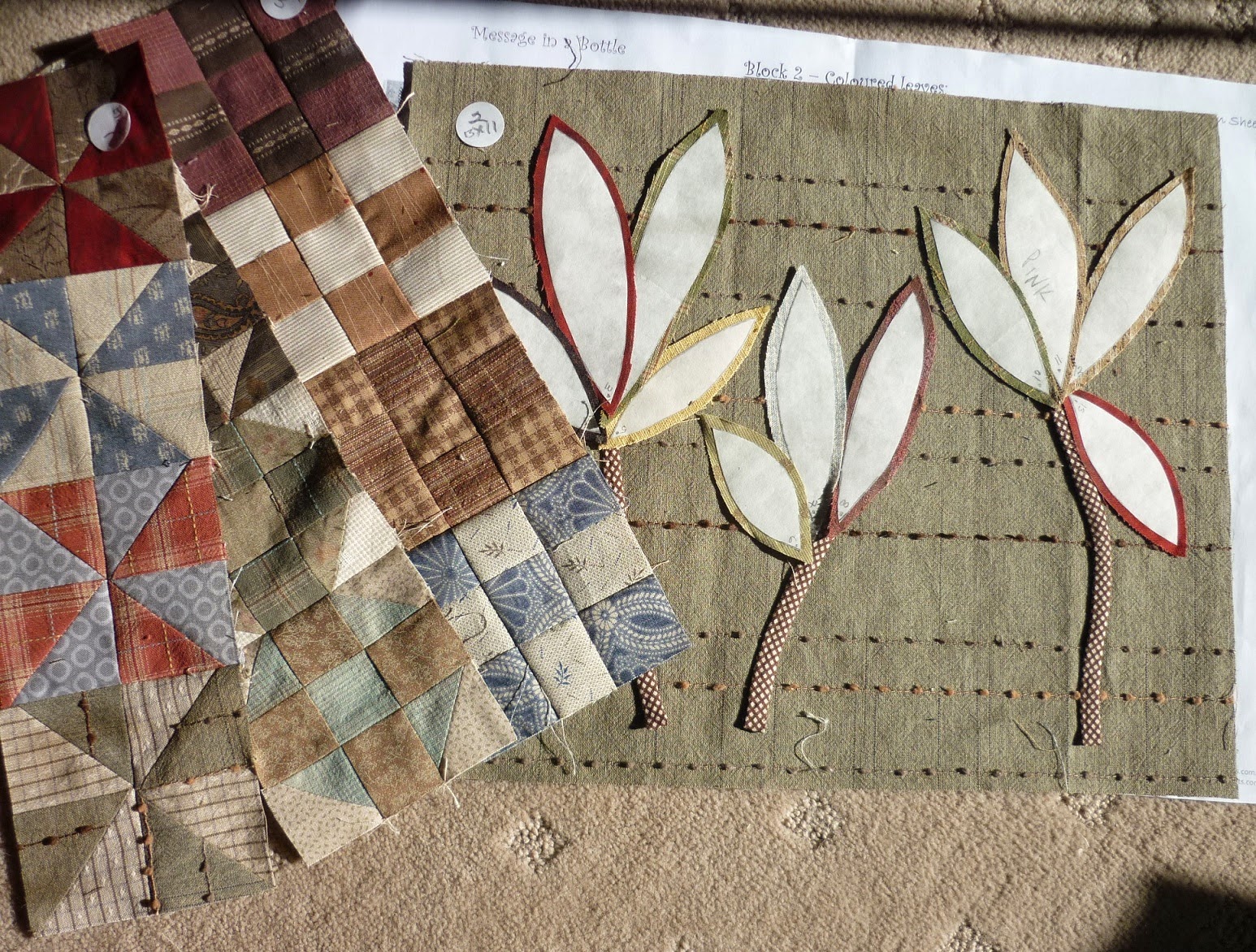 Here are sections 1 - 2 - 3 & 5.  I like to get the backgrounds ready first and this pattern uses several in each block. Putting the main background fabrics aside, so that I don't use them again, the next job is to trace onto freezer paper the applique shapes. Now comes the choosing of each fabric for each piece and this is when time just disappears.  Mornings, afternoons and evenings.  I found a large bag of bias/stems, bits I haven't used up when making other quilts so I will be using them. They are all cotton fabrics but by choosing the ones that are in the 'taupe' colours they will fit in fine. I really like to prepare every block and then as one is sewn/appliqued the next one is ready waiting.
Time to get back to it.

I took part in Lori's Doll's Quilt Swap and today I received my quilt from Randy in the mail. I couldn't get the envelope opened quick enough so that I could see it. It is just beautiful and I love it. 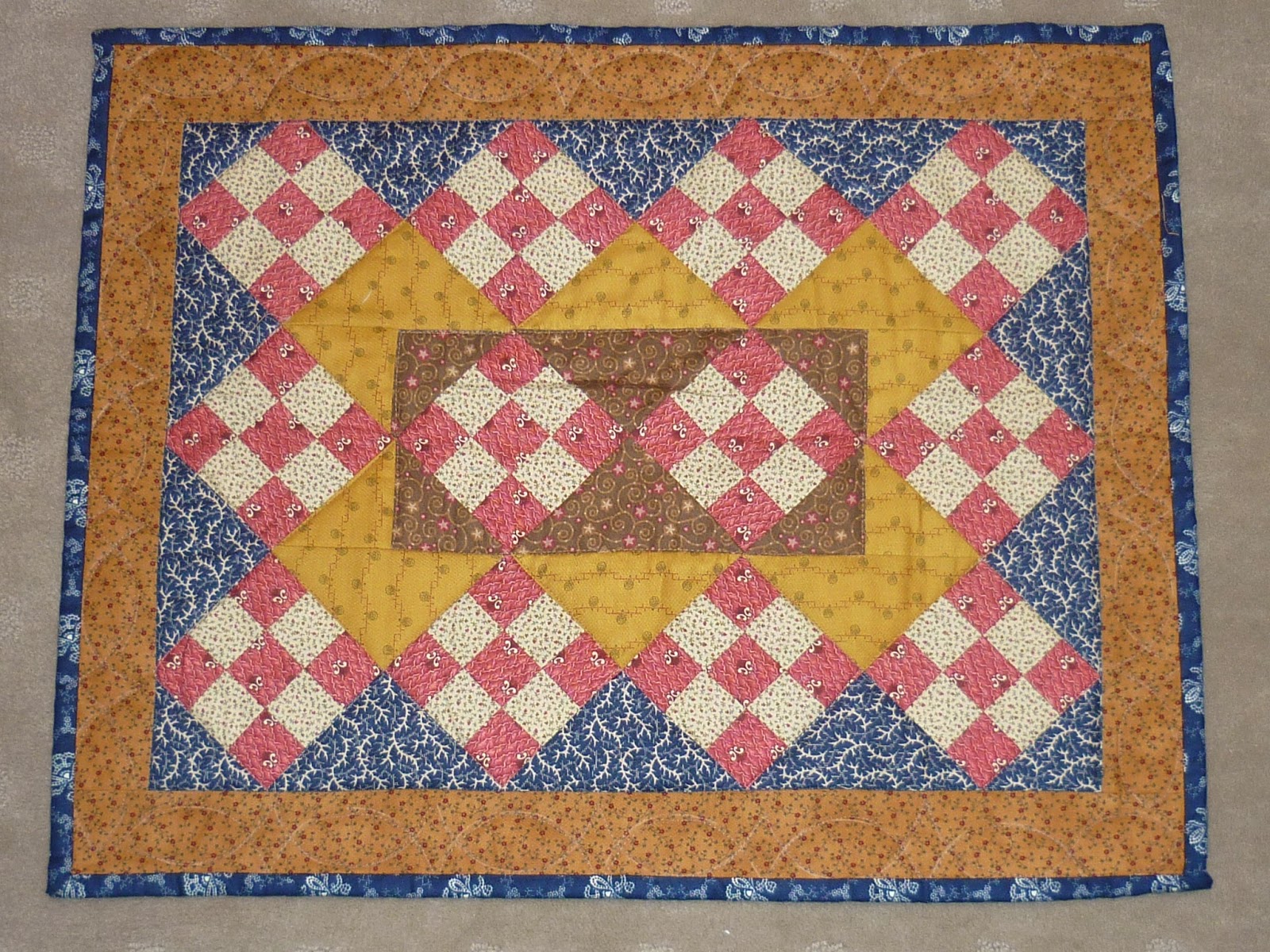 My swap quilt has also arrived at it's destination but I'll let her show it to you. I think Lori is having a photo gallery when they all arrive. I'm really delighted with mine so I hope everyone gets as good as I did.
Posted by Dorothy at 2:57 PM 6 comments:

I picked a Reproduction fabric from my stash to use for the sashing and borders of the Big Top blocks. It is a chocolate background with a small design of a bright blue, yellow and cheddar which picks up the colours in the blocks. It also makes the blocks stand out. 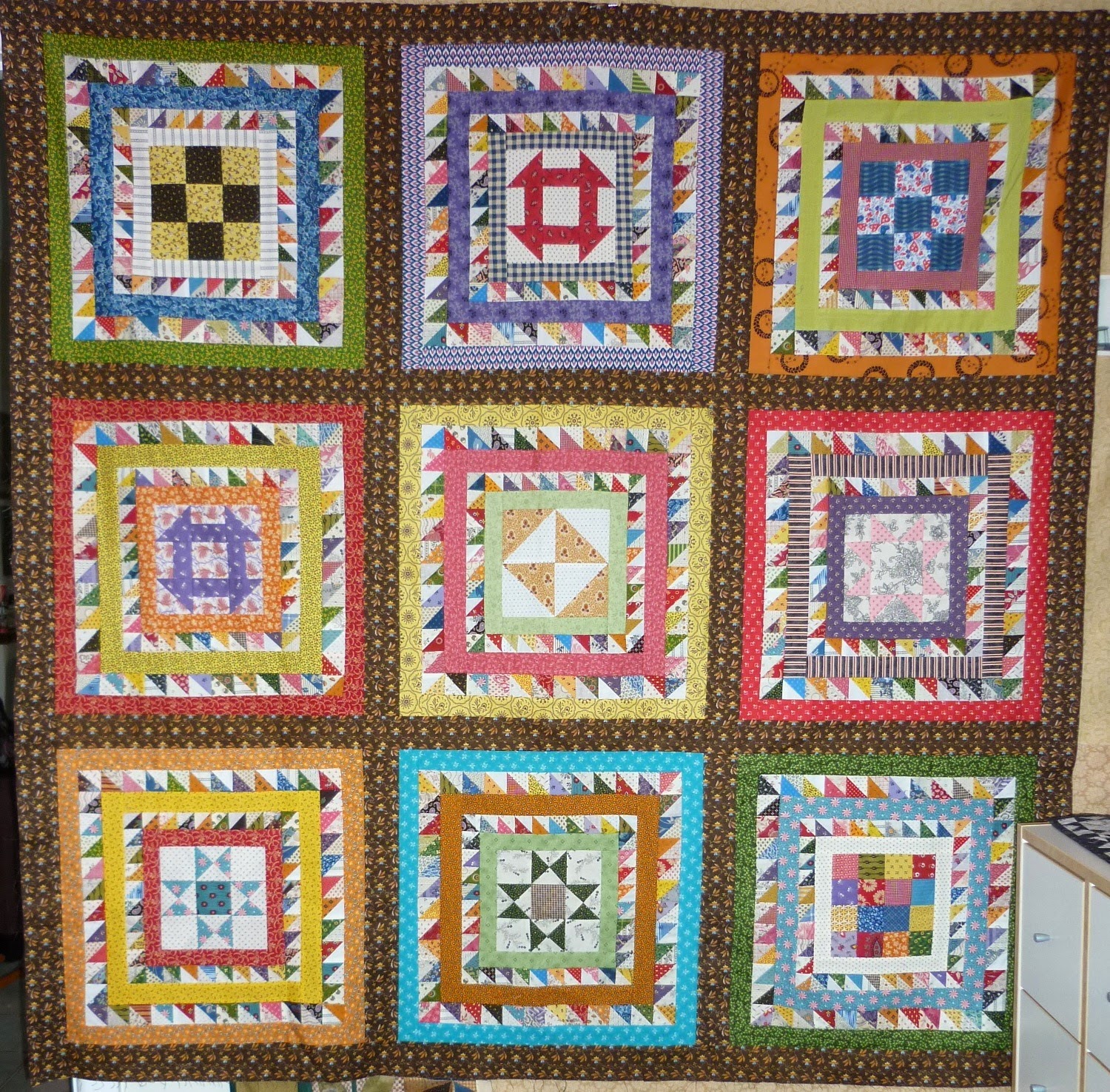 and I've started the trimming of this lot of HST's and made 9 blocks. Just 19 more blocks to go, a daytime job as I like to sit and applique in the evenings. 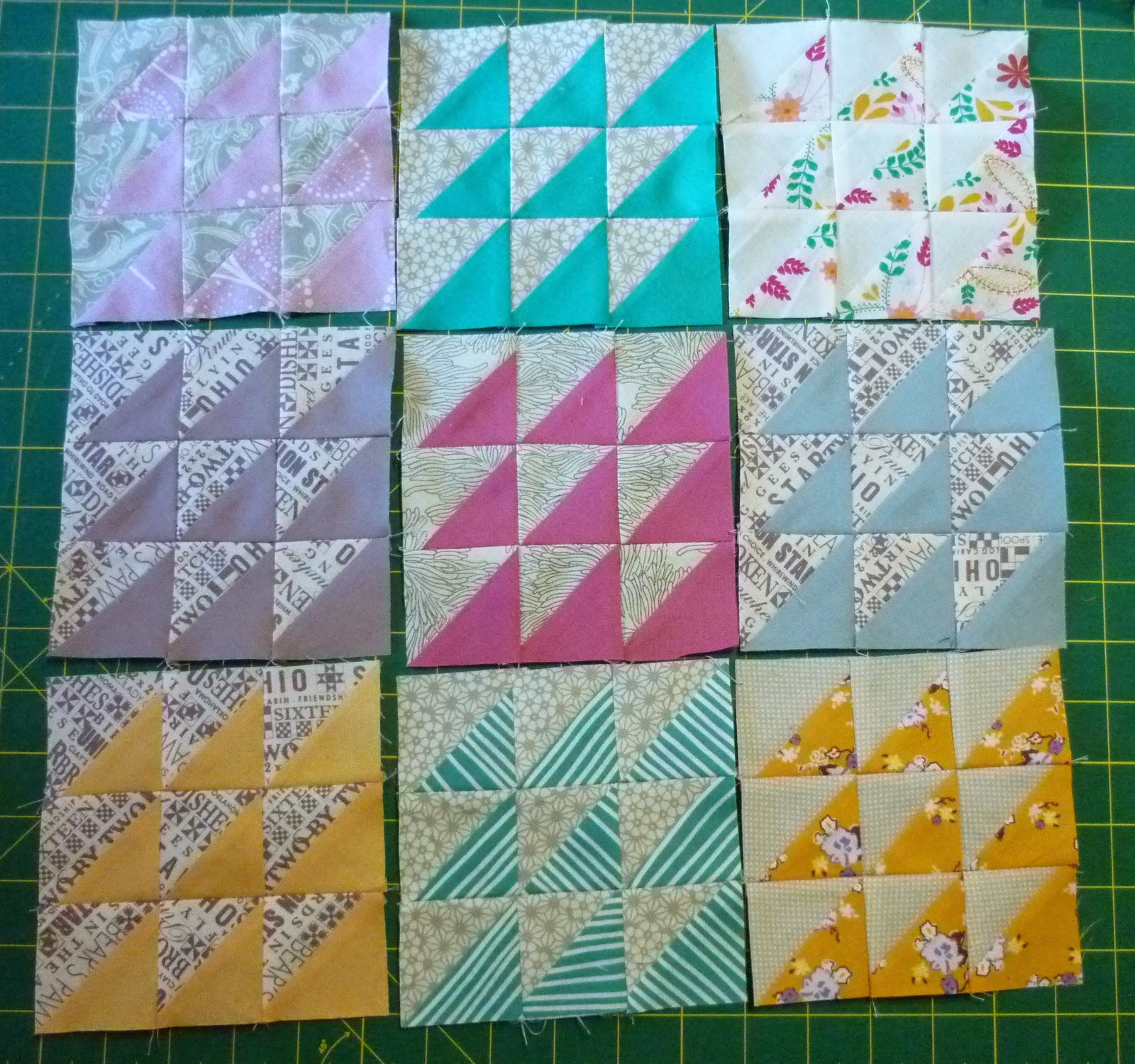 I have a 'few' projects just about finish and decided it was time to just get on and finish them. My Coxcomb and Star quilt has been waiting to be put together. Trimming up the 36 1/2" squares had been the cause of the delay. Not one of my favourite jobs on large pieces, when neither the ruler or the cutting board are big enough. That done I attached the centre sashing and was not happy with the look of what had been supplied in the BOM for it. As there had been plenty of fabric supplied I cut new ones from a lighter fabric left over from an earlier month. Of course, this meant the first ones had to be unpicked. Need I say more! Not a favourite either. Then the borders went on. Yay!  Well, until I looked at these photos and realised the left border is facing the wrong way. 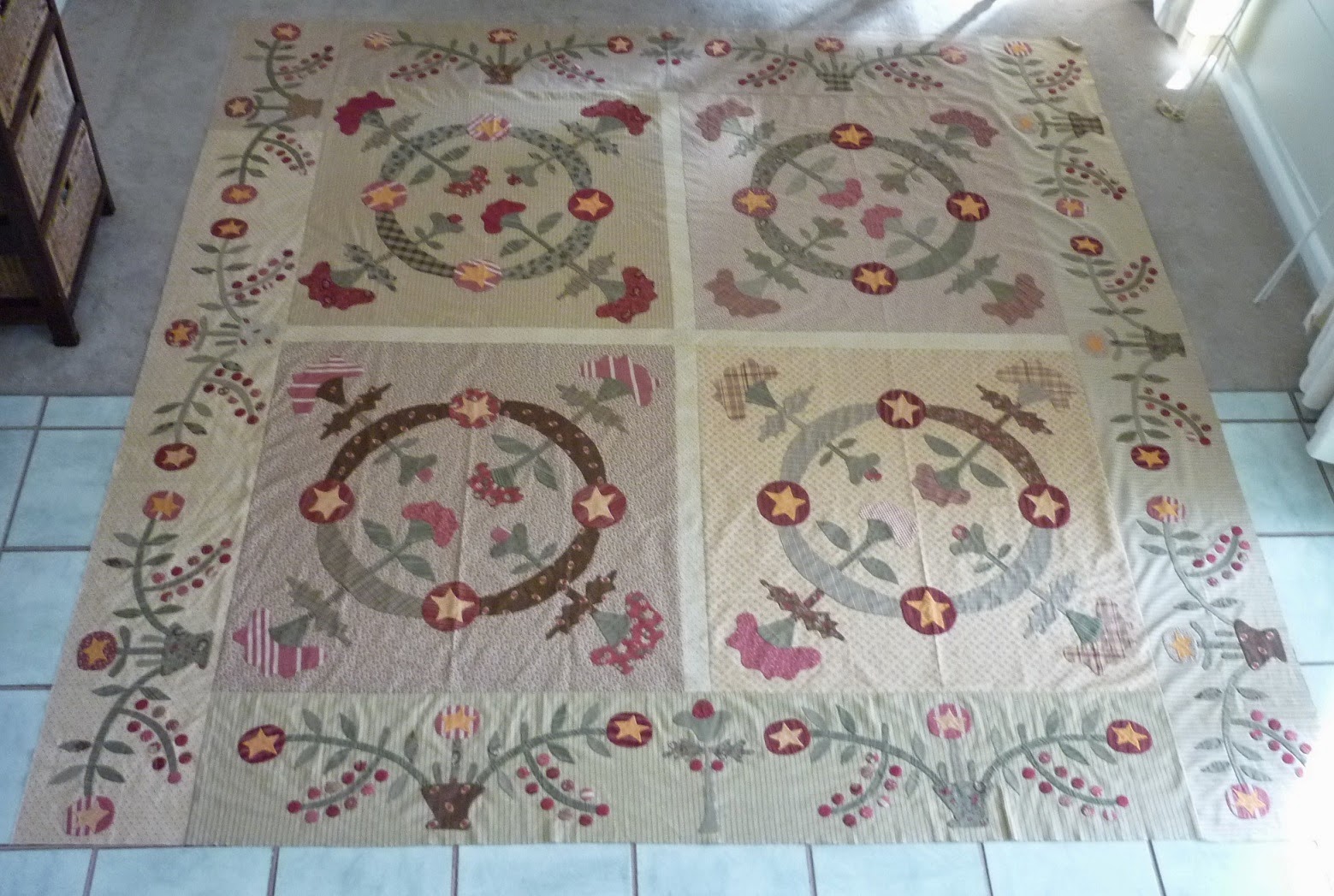 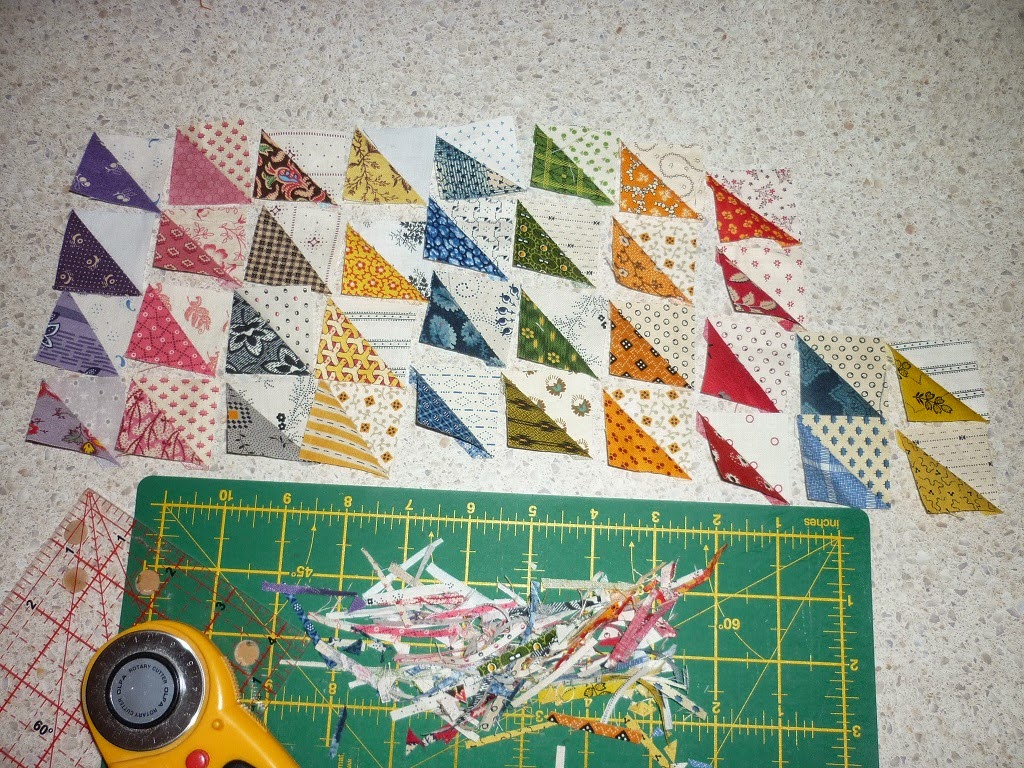 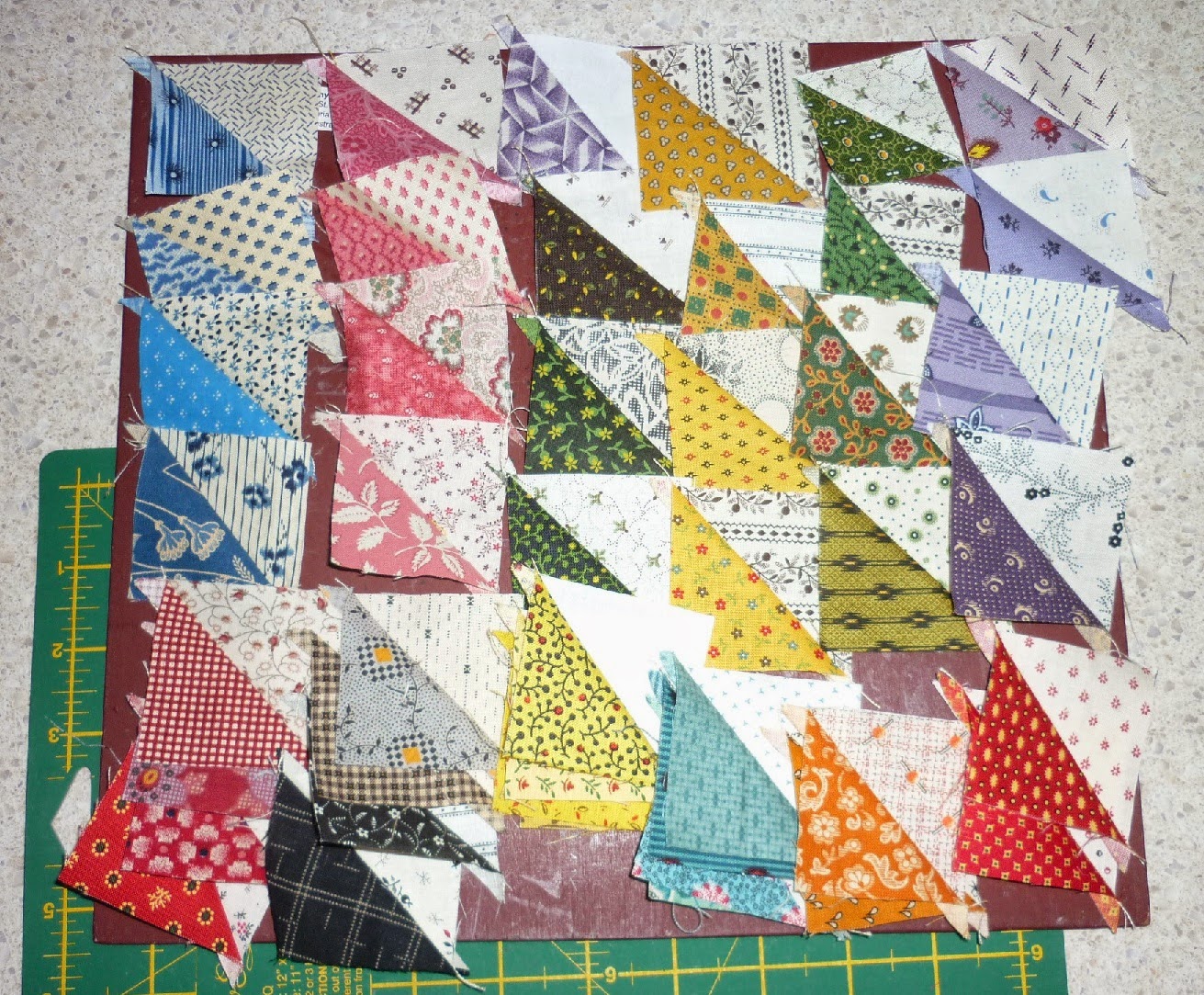 But this was the result. One more block for Lori's quilt. 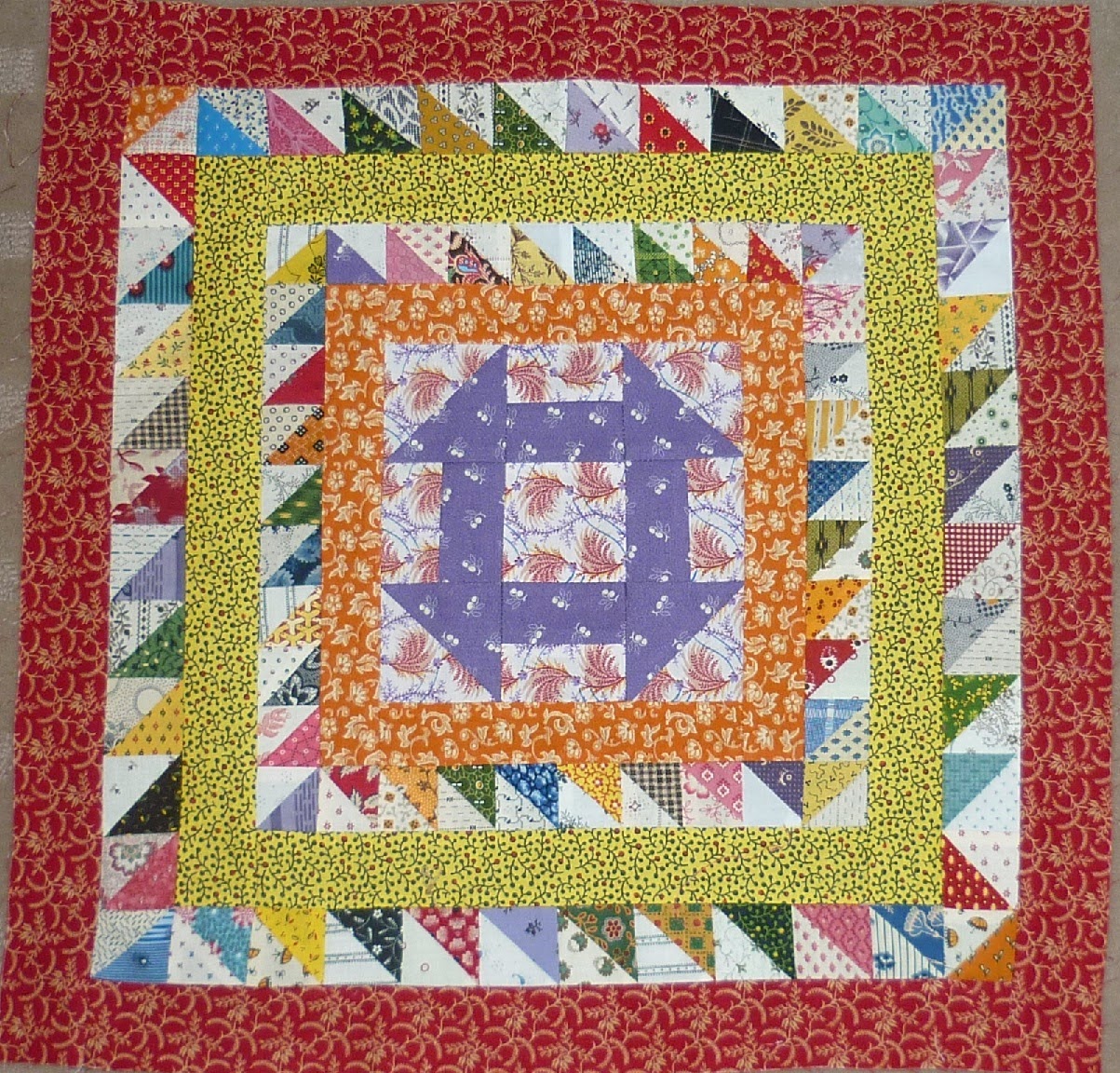 and today, with all the HST's made I also completed the ninth and last block. 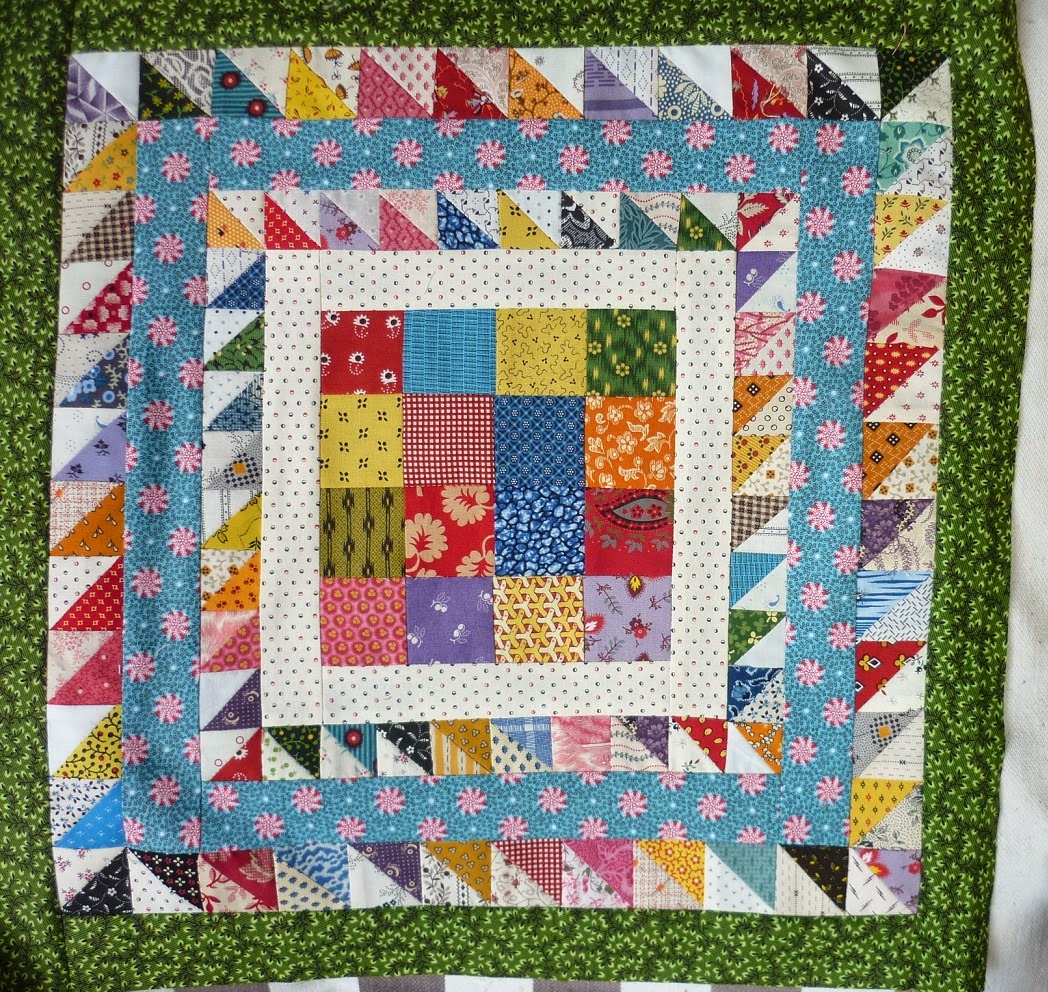 I won't tell you how many squares and HST's I have left. Maybe I'll make some dolls quilts with the squares. I like the look of the centre of the last block.
Now, while on the subject of HST's I have this bundle to trim for 28 blocks. 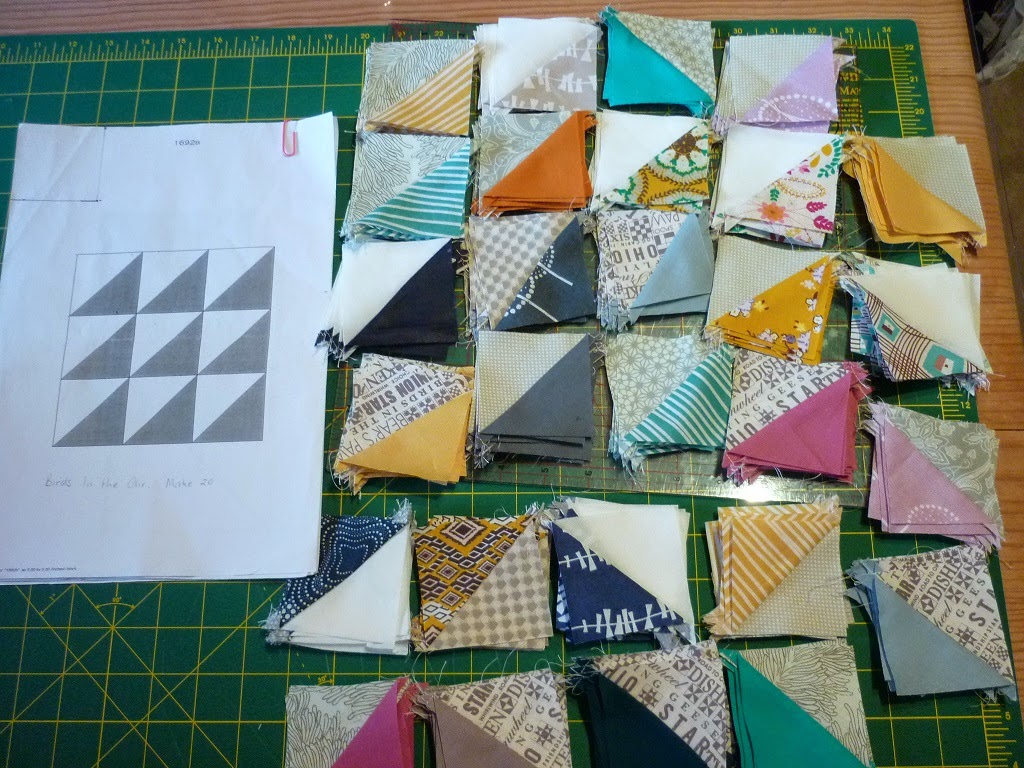 because I still have this quilt on the go. I have the Crossroads blocks made already so after the Birds in the Air blocks just two more rounds to go . 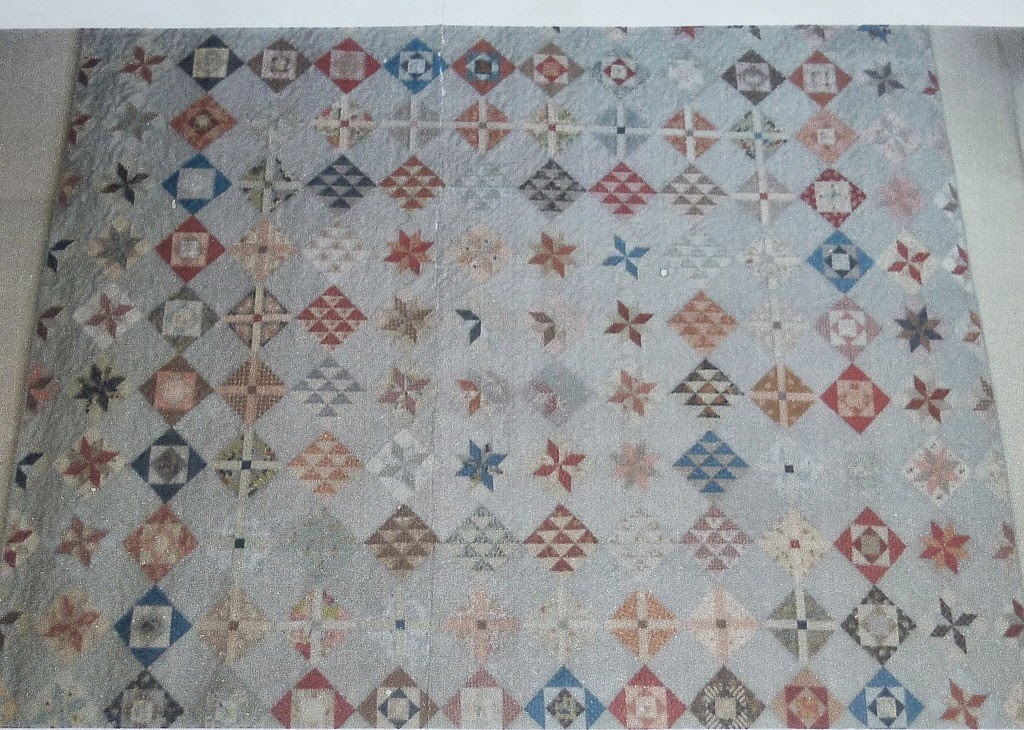 I just have too many bits and pieces on the go at one time.
p.s. I've unpicked the border and it's stitched on,  the right way.
Posted by Dorothy at 5:46 PM 11 comments:

There's been a lot happening.

This week after the workshop at Linda 's I went to an Antique Quilt Day also at Linda's . Many old quilts to see and fabrics to oh! and ah! over and a wonderful lunch and great company as well. Here are just a couple of snippets. 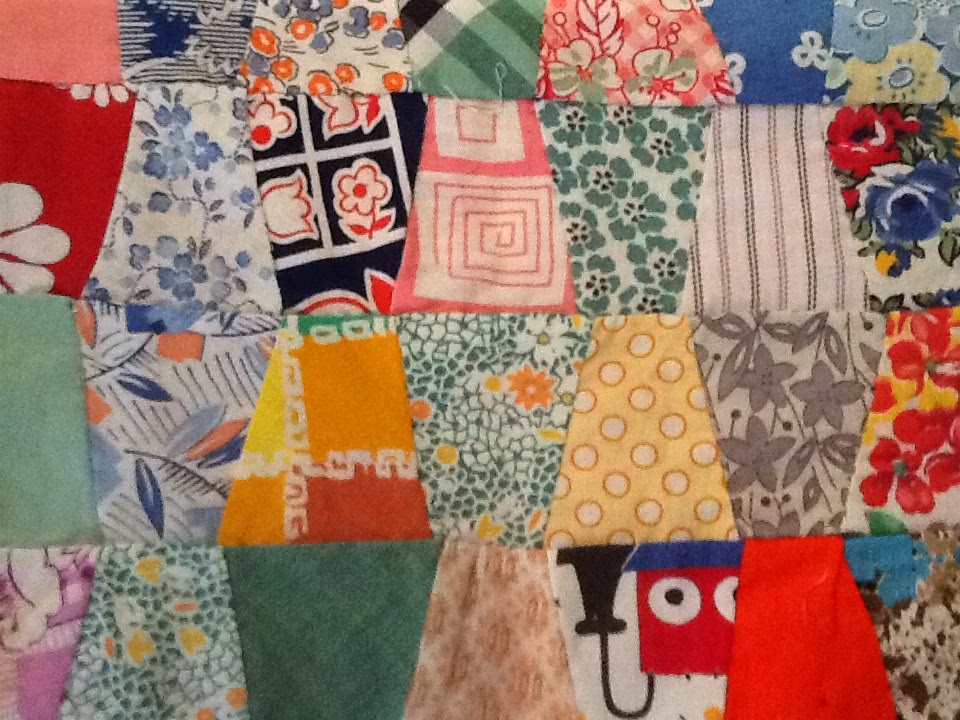 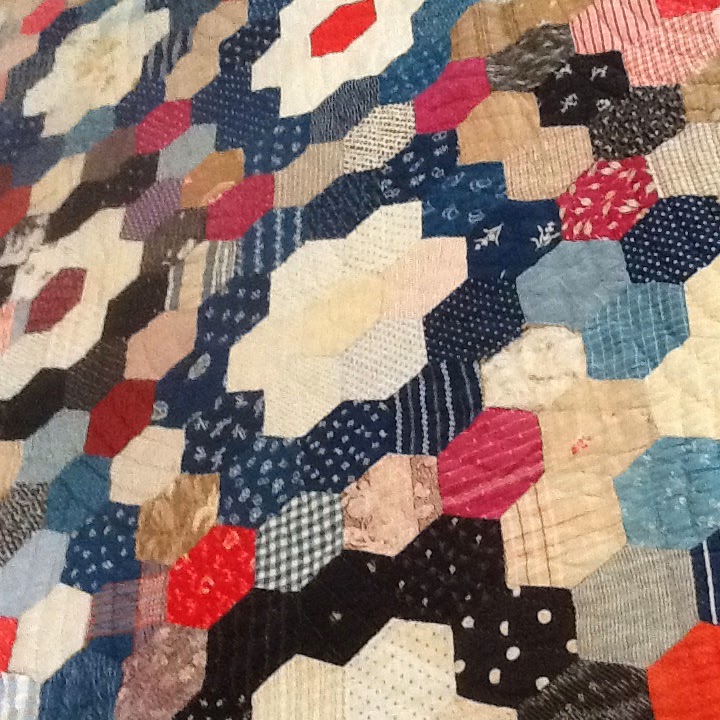 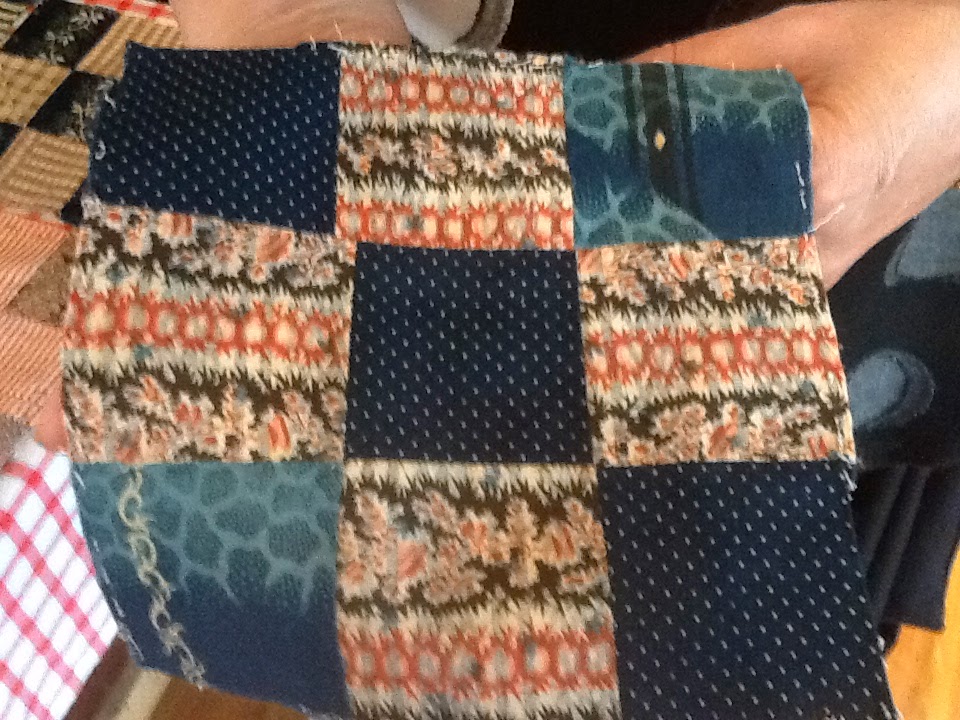 This weekend was our Quilt Show for the Australian Quilters Association 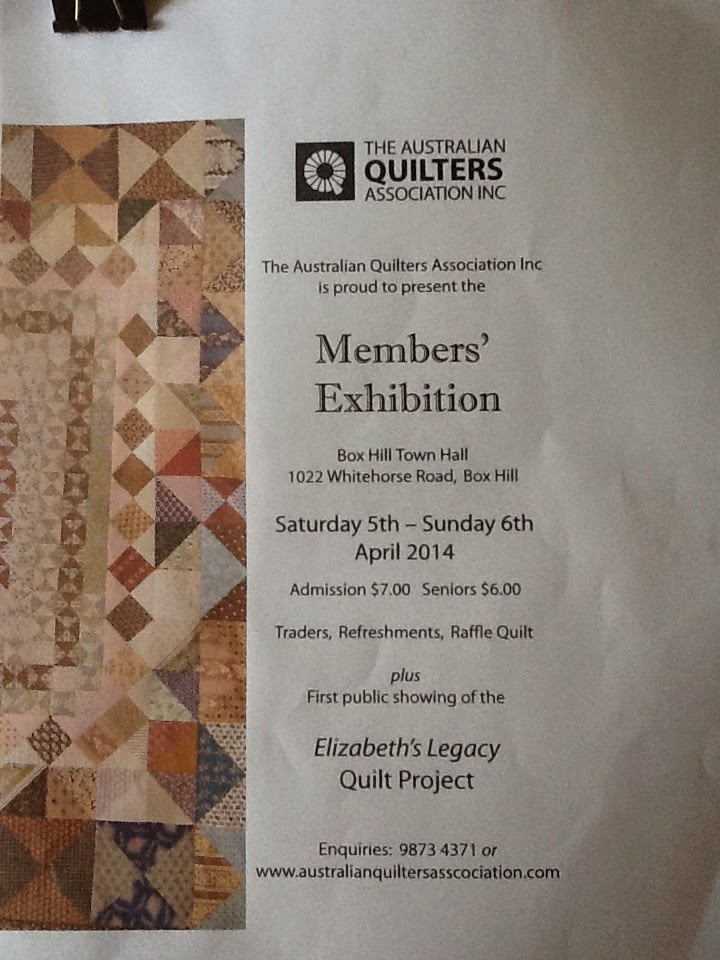 and I was delighted to win Viewer's Choice with my Mary Brown quilt. A shocking photo of it but you get to see the one it is. There were 150 quilts on show plus 26 blocks for a Challenge quilt and several quilts using the Elizabeth Legacy' pattern. A wonderful exhibition altogether. 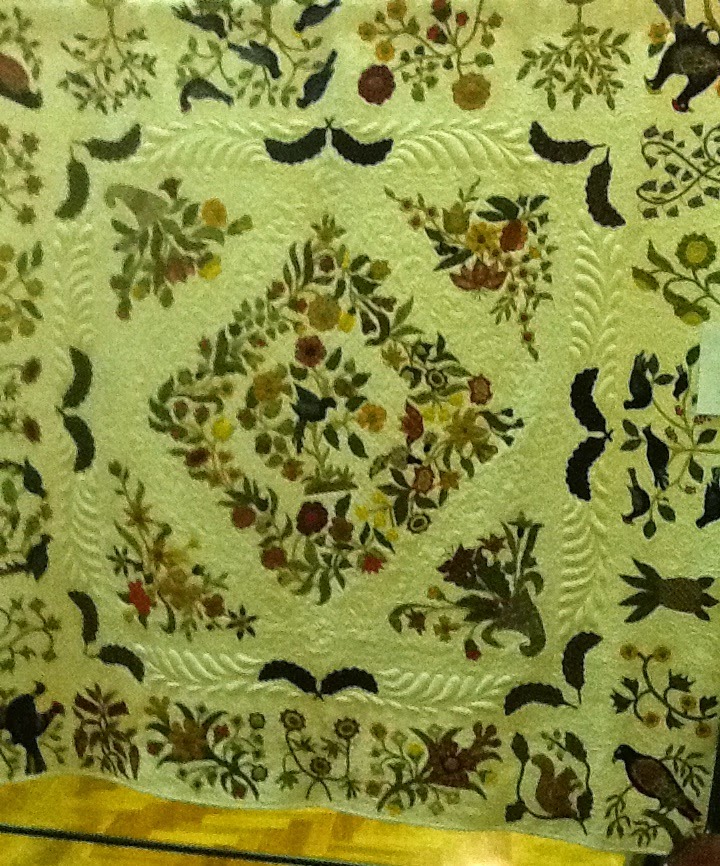 Meantime I have been working on Di Ford's Mystery quilt BOM and have finished getting the border done and attached. 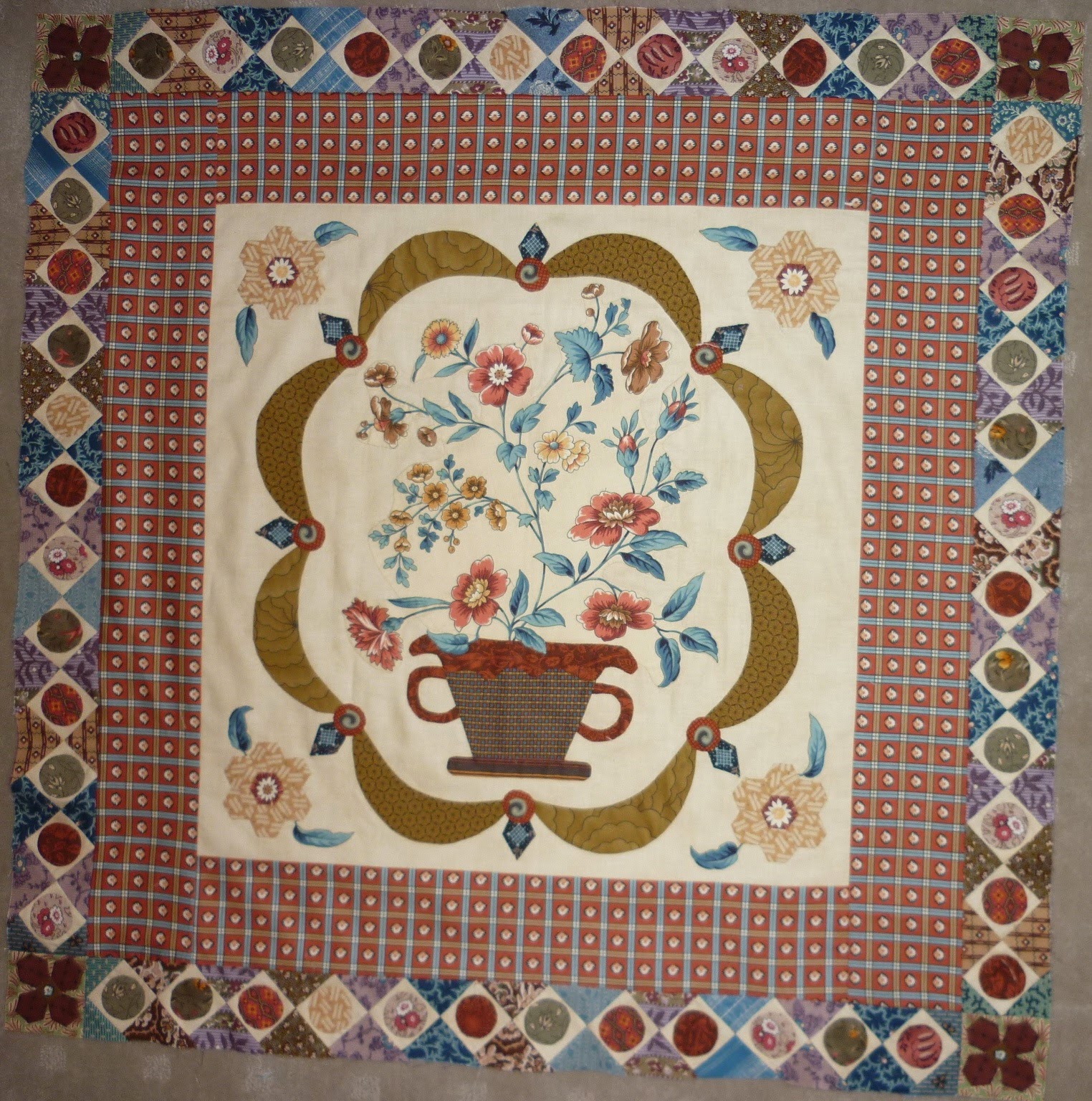 and I've also been sewing the Crib Quilt from my workshop with Marg Sampson-George and it's coming along. Most of the outer elements still need to be appliqued. 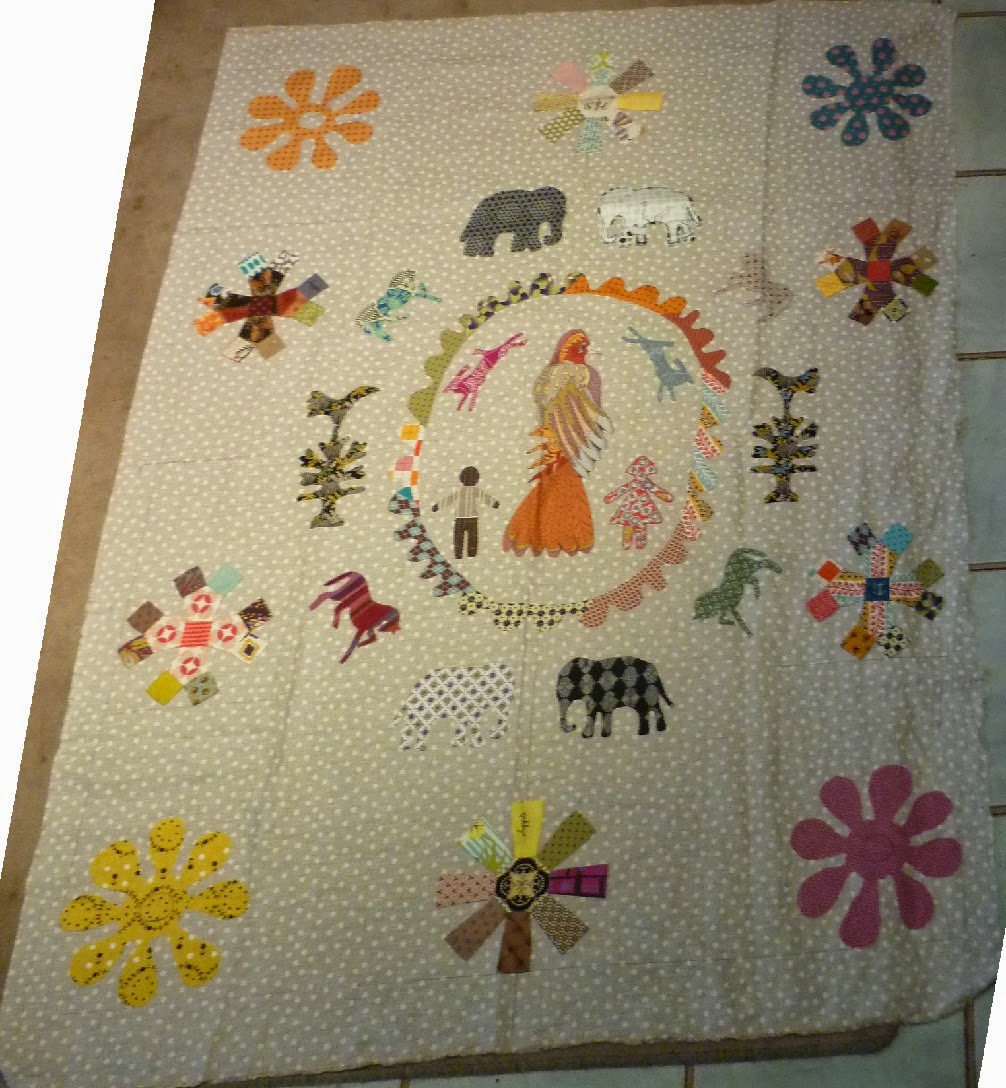 Now back to sewing, I've never had so many projects going at the same time.
Posted by Dorothy at 11:45 AM 9 comments: