Each year I take part in a Christmas Swap with a Prim Yahoo group. This week I received my parcel from Imi in Holland. It contained a Mug Mat, a FQ ,a Christmas decoration and a pattern. Each of us had to send the same to our Swap partner. I have sent my parcel to Sandy in Ohio. The mug mat is all made from felted wool and it is beautiful. The decoration is double sided with a snowman's face on each side and I think everything I received is just lovely. 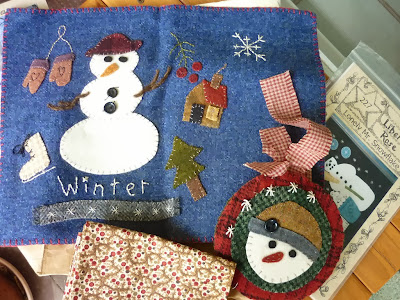 We were asked to bring our scissor collection to the sewing group on Friday at Somerset', this time.  I found scissors with each of my projects, in drawers, containers - everywhere and I decided just a couple would be enough to take.  I have taken a picture of a few of what I have , dressmaking shears which are large, pinking shears which are very stiff, sewing scissors, embroidery scissors, tiny cream travel [airport] scissors and my snips that I use when sewing on the machine.
How many pairs does one need?  How many do you have? 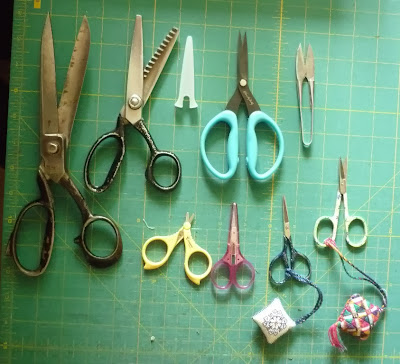 I have one special pair though. I believed  they were my Grandmothers but they may have belonged to my Great Grandmother,  because I have found a name on the side of them and it  would need to a maiden name as it is not my Grandmother's name although this is who I got them from.  They also have a special purpose. They are buttonhole scissors, for the days when there were no zippers. The buttonhole was stitched and then the hole was cut between the stitches. I've put my thimble there to try to show the size. 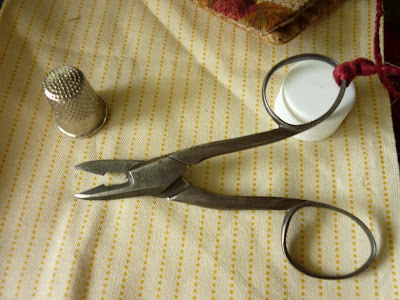 and here is a picture with the hole cut and I've slid a button in the slit to try and show it clearer. Because of the shape of them the blade doesn't cut the edge of the fabric. The piece of fabric I used just happened to have been pinked around the edge and has nothing to do with these scissors. 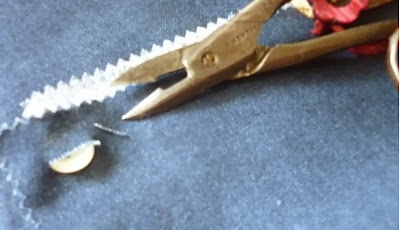 I wonder how old they are? I'll also have to try and find out what my Great grandmother's maiden name was.
Posted by Dorothy at 3:21 PM

I do love our swaps and I Imi always makes such wonderful things. Love the pattern she gave you, that will be fun to do. I can't wait to do my new patterns, will be fun doing more sewing this year. Wonderful scissor collection.

I love you scissor collection, especially those precious buttonhole scissor - what a treasure. It was great catching up with you yesterday.

Lovely presents! And I can't count the number of scissors! I have a complete collection, my fathers, my mothers, my gran's, several others and my own it must be over thirty scissors!
Hugs
Lida

Hello! I love your blog site. Very Inspiring!!! Excellent needlework too. The buttonhole scissors are amazing. There are many of us "old" gals that remember using them....and we are jealous of your
precious family treasures. :D Thank s for bringing back a flood of memories.

Imi's work is unique and lovely, adore the mat. I wish I could have participated this year.

Dorothy, I have a ton of scissors, too. Nothing like your wonderful antique buttonhole scissors, though. They are a treasure, to be sure :)

Looks like a fun swap Dorothy! Cool scissors too.

You can never have too many quilting gadgets and scissors rate highly in there..... I have my great grandmothers scissors and (I think) every pair of sewing scissors I've ever bought, even the scissors I used in sewing at school!!

Lovely swap items.
I have a thing for scissors, won't say how many pair :-)
Open the handles and look for a makers mark, it might also help you date them.

what a lovely swap parcel to receive and what a interesting lot of scissors,thankyou for sharing.xx

Hello, I was away and I am now catching up on reading my fav blogs and even though I am late, I have to comment on this post. I have the exact same pair of buttonhole scissors, given to me by my great grand-mother. I don't know how old they are either. They were made by Rogers Bros. That's all I know if that helps at all. Thanks for sharing. I wish you a very productive quilty 2014 with plenty of joy and health.