I went to the Ballaarat Quilter retreat. It was held at a 4* Convention/Motel centre which was on several hectares of land with beautiful gardens. Unfortunately, Ballarat is one of the coldest places in Victoria at this time of the year and although it only rained now and then, there was a continuous howling wind. The room which I shared with Bev was good, having the beds made,
meals cooked and the dishes done was wonderful. Morning and afternoon tea was accompanied by homemade biscuits made by the Ballarat ladies.
Bev, Ros,Linda and I had come to do a quilt designed by Di Ford called Drayton Hall.
Janet O'Dell, who owns the original quilt was also there for the retreat and had brought the quilt along for all to see.
Here is a photo of some of the fabrics in the quilt. 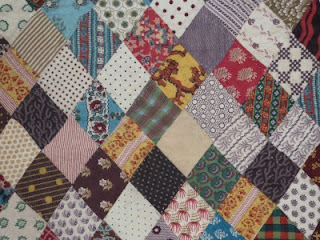 This is the whole quilt. It is enormous. They were photographing the label which was hand written. 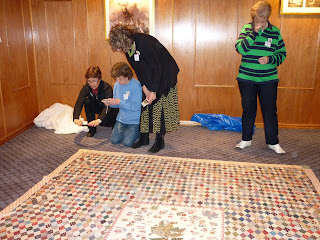 This is a photo of Di Ford's, Drayton Hall. Beautiful. 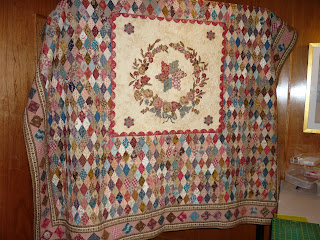 This is a photo of what I accomplished over the weekend. It seems so little. I had bought a floral fabric with these medallions on it and decided to have it in the centre with the hexagons around it instead of having the hexagon centre and floral wreath like Di's. Fussy cutting hexagons took up a lot of time and even more, to sew them together. The ones on the left have still to be stitched together. I machine stitched the edge of the centre to the background and I have a lovely chocolate coloured fabric for the scalloped edge. 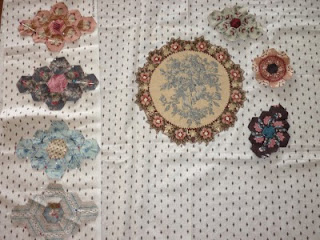 On the Friday night after dinner we met all the tutors and saw a Show n Tell from them.
On Saturday night after dinner we were entertained by a female comedian, Monica Dullard. I haven't laughed so much for a long time. The tears were running down my face. We discovered there was a large number of stitchers called Pam and a lot of them owned Pphaffs, Noeline caught the comedians attention, so much so that at breakfast the next morning when our eyes met we both burst out laughing as we remember the night before. One of the tutors' was caught answering a text message on her phone, it was her 60th birthday, and as she said the next morning she will never forget it after the ribbing she got from the comedian. Those that had decided to go to bed early truly missed out on a great time.
Here is a photo of Monica during her show. 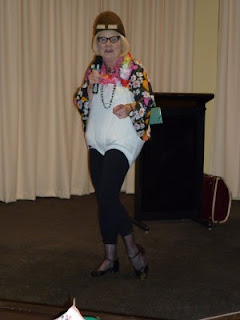 Don't you just love the size4o Bonds cottons.
Posted by Dorothy at 3:11 PM

Hard to imagine why Pacific Brands needed to go overseas for production when so much fabric was being used on those Size 40 beauties.

Looked like a Fab weekend...Love your Fussy Cutting..I saw you as a follower on Glorious Applique blog..I have just joined.
cheers

so nice to see you yesterday, look forward to seeing your quilt when it's finished!!!