While I was away DH and I went to the Botanical Gardens in Brisbane with my daughter to see her artwork on the Bandstand. 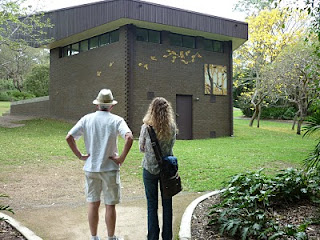 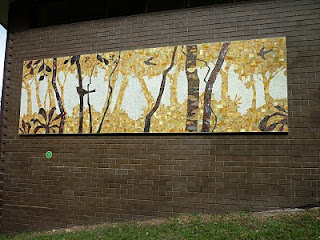 We also went round the Japanese garden. It was soo quiet and tranquil. My daughter spent a lot of time here when she was 'Artist in Residence' last year. 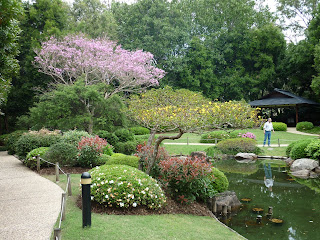 I also visited a sculpture festival called SWELL. The sculptures are along the foreshore of Currumbin in Queensland and as you walk along looking at all the sculptures, in the background is the Pacific Ocean. It was a beautiful sunny day with blue skies which made it just perfect.There were 56 different sculptures. Here are three of my 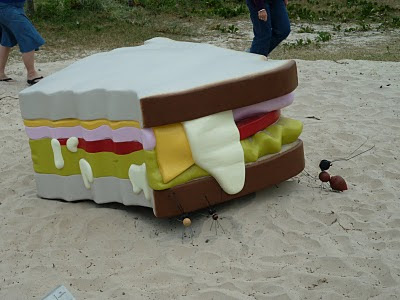 The Race
The photo shows the actual Lifesaver flags on the beach. 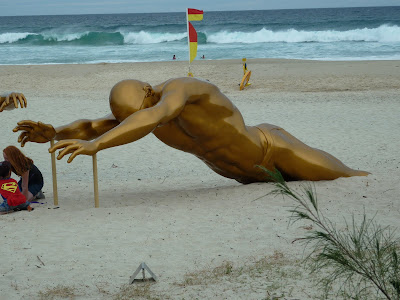 The Picnic is Over

This was made of wool check fabric and it was in a perspex box.
The one behind was called Fiddlesticks. 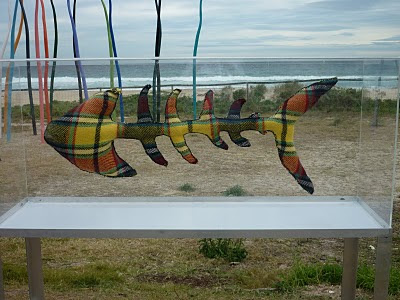 I have been sewing too, I am putting the Prairie Bound blocks together and will show you a photo of it when I get this finished.

I've had a lovely time in Queensland and although I did take some sewing with me, I did so little it's not far enough along to take another photo. I have returned to a garden in flower and how. The Spider Magnolia, the Flowering Apricot, the Irises and some of the Echiums are blooming. Everything has grown soo much. All the rose bushes are heavily leafed and looking very healthy.
I have taken a few photos of the garden and will show you them, the holiday snaps will have to wait till later as the computer is playing up and is going away tomorrow so that my files can be transferred to a 'new' one.
This is the flowering apricot. It is only a third of what we had last year. The other branches were too heavy and were bending over almost touching the ground so we removed them.

Here is one of the Echium bushes and the rose hedge behind with it's new growth.

and this one is the front garden [jungle]. The dark pink flowers are a flowering Sage and what looks like white [behind] is the pink Magnolia.

I finished my needleroll that was the workshop with Sue Spargo at the weekend.
This is the inside. The light coloued fabric R +L is 2 large pockets with zips.
The red wool pocket for scissors/pencil/pen or ruler. The centre is a pincushion bird and a wool needlecase below and there is a ribbon to hold reels of cotton too. 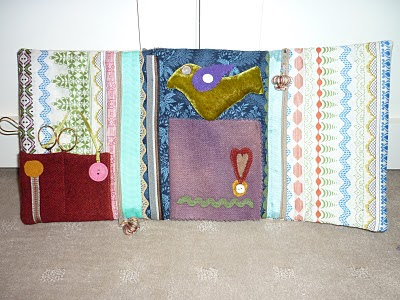 The outside has a pocket on the left, a label on the back and the applique front. The big button
and loop for holding it closed. 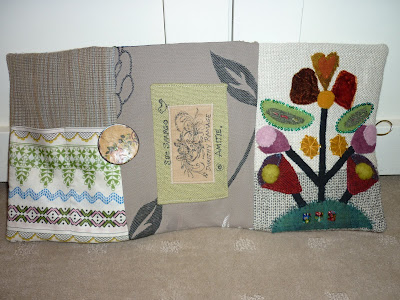 When it is all rolled up, this is how it looks. 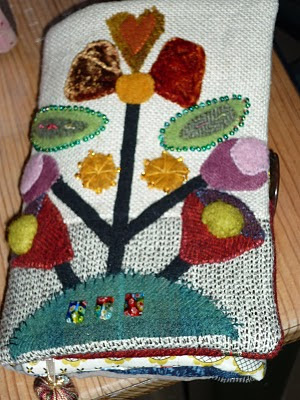 I'm off to visit my daughter for a couple of weeks and may not get to put any photos on my Blog, if so I'll tell you about my trip when I get back.